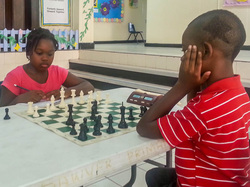 Ashanti Marshall (left) versus Nathan Smith
Competition is strong in this year’s installment of the Independence Tornado chess tournament.  Players in the Open section were fighting for the right to play in the National Chess Championship, while those in the Reserve section were putting their training to the test against their peers.

It was 8-year-old Nathan Smith who came out victorious in the Reserve section, despite playing in only his third tournament.  Smith managed to finish on a perfect 3.0 points from three games, checkmating each of his opponents.  His aggressive, tactical style of play kept the field on their heels throughout and proved successful each time.

Placing second behind Smith was Geovanni Robinson, who scored 2.0 points, followed by Daijah Johnson with 1.0 point to finish third. 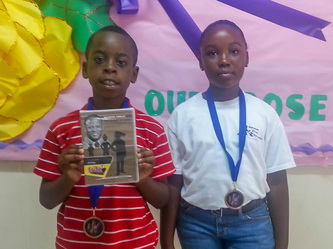 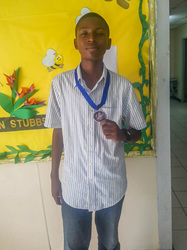 Meanwhile, the veteran players of the Open section had their own battles to fight.  By rating, three-time national champion Ken Gibson was the odds-on favorite, but players like Chappell Whyms, Cecil Moncur, and Philip Hanna Jr. had been making tremendous strides in recent tournaments, showing much-improved play.

Yet it was a Kendrick Knowles, who had not entered a tournament in three months, who seemed to be the best form of the day.  Knowles cruised through his first three games and seem poised to go 4/4, but a stubborn Gibson refused to give Knowles such bragging rights.  Playing the black side, Gibson was forced to withstand a hammering, early central attack by Knowles before a brief respite allowed Gibson to launch a brilliant kingside counterattack of his own that sent Knowles reeling.  With a plethora of black pawns bearing down the board and heading for promotion, Knowles had little choice but to resign.

Despite the loss, Knowles edged out Moncur for first place overall and staked his claim to being one of the top players in the country.  Because Knowles had previously qualified for the nationals, the slot was awarded to Moncur.  With only three more qualifying tournaments before the nationals, the pressure is building on the remaining players to bring their best game before November.